The Bloc & Wall inauguration in Colmar draws a crowd 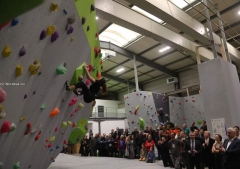 The inauguration of the Bloc & Wall climbing centre in Colmar on the 25 January drew quite a crowd. The centre had only opened its doors for the first time the week before.

Several local councillors and the local media were there for the speech made by the centre’s manager, Sébastien Anglade, who praised ENTRE-PRISES and announced his intention of organising a Deep Water Solo competition next year.

The highlight of the evening was when over 300 people discovered the brand-new centre, with its impressive size and eye-catching colours.

A big thumbs up to all the teams who worked on this project and we wish Bloc & Wall a fantastic future!