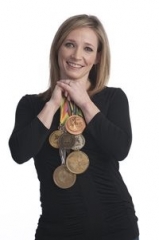 SPIETH America announced in May the signing of a partnership endorsement with Kim Zmeskal, along with the Kim Zmeskal Texas Prime Meet. Kim Zmeskal, once known as a three-time World Champion and 1992 Olympic Bronze Medalist, is the current owner of Texas Dreams Gymnastics in Coppell, Texas. One of the most decorative athletes and coaches in gymnastics history. Kim currently trains champion elite gymnast and two-time US National Team member, Ragan Smith who was chosen as a 2016 Rio Olympic Games alternate. SPIETH America looks forward to a partnership with Zmeskal and the Texas Prime Meet as Kim’s professional feedback and expertise will help SPIETH America continue to be a world leader in gymnastics innovation. Zmeskal’s Texas Prime Meet will showcase SPIETH America’s equipment and give athletes the opportunity to compete on “best in class” international equipment. “We are very excited to welcome Kim to the SPIETH America team!” said Brent Poulsen, Vice President of Sales for SPIETH America. “Kim is not only a gymnastics legend with a very rich history of athletic success, but she has now established herself as one of the leading professional coaches in the world! What gravitated us towards Kim was her relentless pursuit of excellence she strives toward with her athletes in the gym while at the same time understanding the correlation between product innovation and an athlete’s health and well-being. We look forward to having the Texas Dream’s Gymnastics facility test the equipment and provide valuable feedback, but we also look forward to showing the US market an alternative equipment supplier that is capable of supporting USA Gymnastics.” The event industry in the United States has been in need of an alternative for some time and Kim Zmeskal’s Texas Prime event is one of many that the SPIETH America’s team is excited to announce for 2018! Zmeskal stated, “As an Olympic gymnast, and now a coach, gymnastics has seemingly always been my playground filled with the likes of bars, beams, and mats galore! SPIETH America and I share the same high-quality, top-notch expectation from the equipment upon which gymnastics magic is created, making our partnership very natural and exciting!”