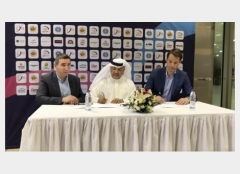 The ABEO Group, headquartered in Rioz (Eastern France), has just signed a four-year contract with the Qatar Gymnastics Federation at the 10th Artistic Gymnastics World Cup, which was held in Doha from 22 to 25 March 2017.

The ABEO Group, specialising in sports equipment, was already official supplier at the last Olympic Games. For the 2016 Rio Olympic Games, the Group supplied the artistic and rhythmic gymnastics equipment (competition podiums) as well as basketball equipment (hoops). This same year saw the group initiate the IPO process and raise 22.2 million euros to invest in its international development.

Today, ABEO has won a new contract. The sport and leisure equipment specialist has signed a four-year partnership deal with the Qatar Gymnastics Federation. Jacques Janssen is more than delighted. ‘We are especially proud that our SPIETH GYMNASTICS brand has been chosen by Qatar to develop gymnastics at the highest level thanks to an ambitious investment strategy’ declared the group’s deputy CEO.