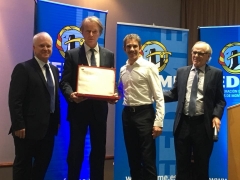 The Spanish Federation for Mountain and Climbing Sports presented the award to the ABEO Group for its involvement and support in the development of the climbing competitions during the past year.

The Spanish Federation for Mountain and Climbing Sports acknowledged the support and involvement of CLIMBAT / ENTRE-PRISES in the good development of the national climbing competitions during the current year 2017.

The President of the FEDME, Joan Garrigós, presented to Eric Surdej, CEO of ENTRE-PRISES and Stephan Labarrière, Chief Operating Officer in Europe, the award which materializes the close collaboration of the company belonging to the ABEO Group and the Federation. Thanks to this collaboration, the National Championships and the Spanish Cup shone more than ever during the 2017 edition.

The prize was awarded during the Mountaineers Annual Meeting 2017 in Madrid where the Federation honoured the most successful athletes.