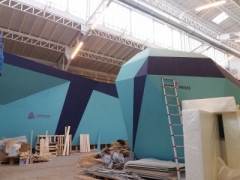 A concept very much in phase with the vision of ENTRE-PRISES which has had a lot of pleasure to accompany ARKOSE throughout this beautiful project where climbing becomes accessible to most people.

After having opened two centres in the Paris suburbs, Arkose is now opening its first bouldering centre within Paris itself. So just head to the Nation district in the 20th arrondissement in Paris and discover the centre as of end of January.

Indoor climbing centres are as popular as ever. After having opened a centre in Montreuil (eastern suburb of Paris) in 2013 and another one in Massy (southern suburb of Paris) this year, the Arkose Group decided it was time to move into the heart of the capital. The centre will be opening its doors at 35 rue des Grands Champs in the Nation district at the end of January 2017.

Whether you are an expert looking to fine-hone your skills, or a beginner looking to start out, our boulders are sure to meet your expectations. Plus, we give you more than just bouldering! As with our other centres, this centre is also a place to relax and offers an eco-friendly restaurant favouring locally-sourced and preferably organic products.

Good things come to those who wait—not long now till our doors open!